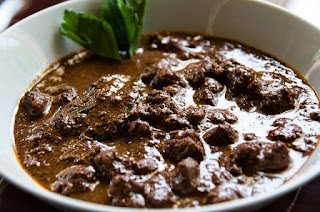 Saksang is a typical Batak cuisine made from pork, dog meat, or buffalo meat that chopped and spiced with spices and coconut milk, and cooked well by using the blood of the animal slaughter (margota) or processed ordinary spices without blood (na so margota). Spices that are included in the spice of saksang, among others; kaffir lime and bay leaf, coriander, onion, garlic, chili, pepper, lemongrass, ginger, galangal, turmeric and andaliman.

Although this dish is widely known by various of Batak sub-tribes, it is often associated specifically as a traditional Toba Batak dish. Saksang is an important dish that must be served in Batak traditional ceremonies, especially in traditional wedding ceremonies. Saksang, together with panggang (Batak style roasted pork), naniura (pickled raw fish), naniarsik (carp arsik) and daun ubi tumbuk (crushed parsnip), is a popular dish in the treasures of Batak cuisine, and is commonly served in Lapo (Batak traditional bar and restaurant) 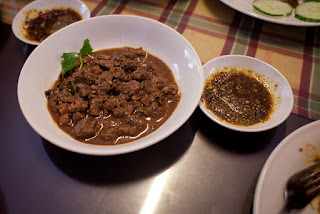 The main characteristic of this cuisine is to have a fragrant aroma with a distinctive spicy flavor due to seasoning of andaliman, besides the marinade consists of onion, garlic, ginger, galangal, lemongrass, old turmeric, coriander, red pepper, orange leaves, cayenne pepper and salt which is completely ground and mashed except the coriander. All the herbs pan-fried until fragrant then pork mixed and stirred until evenly and given salt.

Generally after almost matured, the blood of the animal slaughtered into a dish that gives a distinctive texture. For those who do not want to eat blood, can be replaced with sauteed grated coconut to get almost the same texture. When eaten, Saksang will feel spicy bite on the tongue. Andaliman also make the Batak dishes that use it as a spice, to be very distinctive Batak because andaliman not used in other regional cuisine.
Asian Food Indonesian Food
Location: North Sumatra, Indonesia 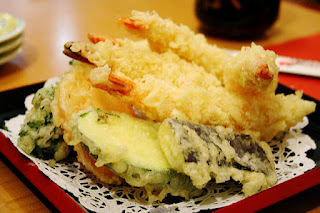 Tempura is Japanese food in the form of seafood, vegetables, or wild plants are dipped into the dough of flour and egg yolk diluted with cold water then fried with a lot of cooking oil until light yellow. Tempura does not refer to the dish. But more to the process of coating meat or vegetables with tempura batter. Then the ingredients are fried with a lot of oil. Therefore, in fact anything can be a tempura. Starting from cheese to fish can be made tempura. Tempura also means a different way of frying with furai (Japanese term for deep fry). Tempura fried foods are dyed into tempura dough, while deep fry fried foods are wrapped sequentially with flour, egg whisk, and panir flour. The dough is made from a mixture of eggs and flour. The ingredients are mixed lightly with cold water. When each ingredient is battered, it's important to keep the dough cool. So that the coating layer of tempura thin and crisp when fried. Cooking oil used for frying tempura preferably clean 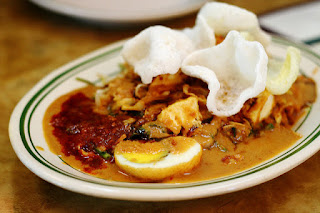 Gado-gado is an Indonesian salad derived from Betawi consisting of steamed vegetables and mixed together, with peanut sauce and hard-boiled egg slices. In general, many people also add boiled potatoes that have been mashed to gado-gado sauce. Boiled potatoes cooked together with peanut sauce and then topped with fried onions. To add variety, usually gado-gado added in it tofu and tempeh. There are a variety of variations to splash on top of gado-gado, there is a seasoned with mayonnaise and also peanut sauce dressing. A little bit of fried chips or crackers (some wearing prawn crackers) are also added. Gado-gado can also be eaten with white rice or sometimes also served with lontong  (rice wrapped in a banana leaf). The vegetables that are often served can be vary, although the usual vegetables are: Sliced ​​green vegetables such as lettuce, cabbage, cauliflower, long beans, and sprouts Other vegetables such as carrots and cucumbers Tomato Boiled ​​potatoes are slic